There was a strong rally in the commodity markets in July, in many cases building on the solid gains that were seen in Q2. The precious metals complex led the way higher, with a 32% m/m surge in silver prices, gold jumped by 11% to reach a record high around US$1,970/oz and platinum and palladium were up 9% and 8% respectively. Meanwhile, iron ore and the base metals rallied by 5-11% and Brent crude increased by 5% m/m.  Markets have started to look frothy amid a speculative surge into some markets. 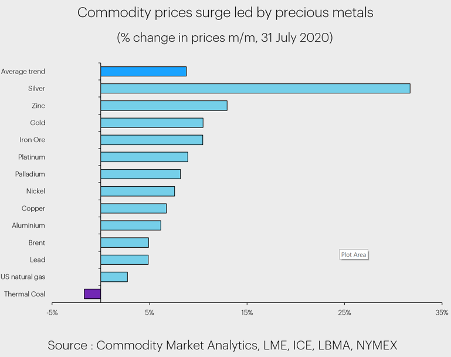 The commodity markets continue to be largely driven by broad macroeconomic and political drivers, with fundamentals being less important, as a wave of bullish sentiment swept through the complex. There are three key drivers of prices at present. First the economic recovery continues at a decent pace. The most recent Caixin figures for Chinese manufacturing showed a rise to 52.8 in July, from 51.2 in June. Similarly figures for Europe showed an index level of 51.8 in July, from 47.4 in June helped by strong growth in orders. Finally, the US ISM index reached 54.2 in July, up from 52.6 in June. (A figure above 50 indicates growth).

The second driver is that the US$ has tumbled, which tends to boost demand and discourage supply. The US dollar index – DXY – fell by a sharp 5% m/m in July, which was its worst performance since 2010. The dollar has been undermined by exceptionally low real yields and confidence has been shaken by political infighting and turmoil ahead of the US election. The US economy is also still suffering from the coronavirus and has recorded more deaths and cases than any other country. The country still looks to be heading into the eye of the storm in terms of politics and health and the economic recovery cannot therefore be taken for granted.

The third driver is that speculative interest in commodities has seen a resurgence, as central banks have been pumping massive amounts of money into the economy and risk appetite has been boosted, resulting in investors chasing yield and looking for fresh opportunities to diversify their portfolios. Speculation has been seen most clearly in gold. Inflows into gold ETFs were close to a record high in April at 178 tonnes and buying remained buoyant into late July, despite record prices. Similarly, for copper, net speculative positioning is now close to the top of its normal range at 43k contracts, according to the US Commitments of Traders report. 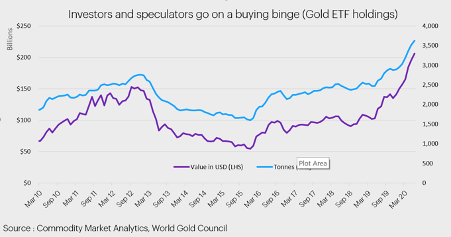 While commodity markets are currently riding this bullish wave there are warning signals starting to flash that the recovery in prices has gone too far, too quickly and key markets such as copper look overbought. Speculative interest remains elevated, which could persist for a while yet, but hot money flows could easily evaporate or reverse with little warning. Overall, we believe that risks for commodity prices are broadly balanced suggesting that the months ahead are more likely to see consolidation, rather than further gains and volatility is likely to remain high. Downside risks come from challenges around the November US elections, but also a second coronavirus wave remains a major obstacle to higher prices, particularly as we start to head into the northern hemisphere winter.

This website uses cookies to improve your experience while you navigate through the website. Out of these cookies, the cookies that are categorized as necessary are stored on your browser as they are essential for the working of basic functionalities of the website. We also use third-party cookies that help us analyze and understand how you use this website. These cookies will be stored in your browser only with your consent. You also have the option to opt-out of these cookies. But opting out of some of these cookies may have an effect on your browsing experience.
Necessary Always Enabled
Necessary cookies are absolutely essential for the website to function properly. This category only includes cookies that ensures basic functionalities and security features of the website. These cookies do not store any personal information.
Non-necessary
Any cookies that may not be particularly necessary for the website to function and is used specifically to collect user personal data via analytics, ads, other embedded contents are termed as non-necessary cookies. It is mandatory to procure user consent prior to running these cookies on your website.
SAVE & ACCEPT